I DID IT! 7 STRAIGHT HOURS OF ANIMATING AND okay let me turn caps off - the update is done, 7 hours of animation later! 3 new H-scenes (the final scene of the Warped Female Soldier, the solo sex scene for the Warped Sentry, and the duo sex scene for the Warped Sentry) and the new enemy are the highlights this time around - the time crunch from being late on the last update means it's a little light on other stuff, but FUCK IT THERE'S SO MUCH ANIMATION PACKED IN HERE I HOPE YOU ENJOY IT ANYWAY.


I never did find time to get new sound effects, and I didn't make a new logo (there's a real good reason for that one though that I'll be able to reveal soon), but I managed to get everything else done. The list looks small, but there was a lot in there - especially the new enemy, which is already fully implemented with two sex scenes (and climax animations). The stream chat seemed to think they're the best scenes in the entire game so far as well, so hey. Maybe they'll tickle yer fancy. ON TO THE NEXT UPDATE.

This is an interesting one. I am yet again going to try and finish an entire enemy (luckily this one is a bit more simple), and the Sentry is getting some nice gameplay tweaks - namely, the subweapons (Force Shot and Wire Shot) will have unique effects against her. This is something I'd like to do for several enemies in the game eventually, as well. All in all there should be at least 3 new H-animations again next month!  Thanks so much to everyone rooting for me. I'm taking a short break to relax and celebrate new years, then I'll be back with more updates and streams! HAPPY NEW YEARS EVERYONE!
-A42


UPDATE v.19 MINOR ISSUES
-Major bug with stacking map/pause menus (leading to a black screen) fixed
-Room transition bug in cursed room fixed
-Catacombs can no longer be accessed without the double jump
-Pause menu map size increased to accommodate Catacombs
-Insects can no longer bypass iframes to activate H-scenes early
-Fixed bug that would cause Alicia to freeze if you opened the map and pause menus at the same time
-Alicia can no longer be damaged by struggling when the struggle bar isn't there
Posted by Anon42 at 5:21 PM 2 comments:

Hey everyone, quick update about streams. I was going to stream every day after Christmas until New Years, but some stuff came up, and I have to skip today's stream. I should still be able to do the 30th and 31st, though! Sorry to disappoint anyone who was looking forward to today's stream, but I have some life stuff I have to take care of before New Years (nothing bad though, so no worries).

In addition to that, I just wanted to let everyone know that there won't be 5 new H-scenes this month, like I mentioned I might be able to do earlier. There just wasn't enough time for it on top of the other things that needed to be done; however, there WILL be 3 new scenes, so it's still one of the largest amounts of new H-content there's ever been for an update! I have high hopes next month will be similarly large, as well.
-A42
Posted by Anon42 at 8:43 AM No comments:

Hey everybody! Wanted to share a gif of what I spent yesterday's stream on with you:

As well as remind everyone that there's another stream coming up in a few minutes! It might be slightly late, since I slept in a lot longer than anticipated and I still have a few things to do first, but it'll be starting very soon! Hope to see you there! https://picarto.tv/Anon42
-A42
Posted by Anon42 at 9:53 AM No comments: 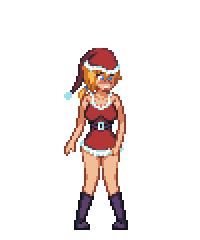 Merry Christmas, everybody! Hope your holidays are going well!
Posted by Anon42 at 11:11 AM 1 comment:

Hey guys, sorry to disappoint but I'm going to have to cancel the stream today - my girlfriend is heading out of town tomorrow, and we still have some Christmas preparations to attend to before she leaves, so I've gotta focus on that today. I'm still planning on streaming the day after Christmas though, and we should be streaming every day until the update is done after that! Hope to see you on the 26th!
-A42
Posted by Anon42 at 7:55 AM No comments:

Hey everyone! Quick announcement about my streaming schedule; I'm going to be streaming in about 30 minutes (1pm-5pm EST, as usual)! I'll be doing this today and tomorrow, then taking a short break for Christmas, then probably streaming again every day for the rest of 2015. Hope to see you guys there! https://picarto.tv/Anon42

Time for the real post I mentioned! The last few days of streaming have been dedicated to this lady:

This is the Warped Sentry. Much like the Soldier and Scientists, she was a member of the military that was sent to this planet to assist in finding a cure for the virus. Until the planet had its way with her. Now she's just as lust-filled as the rest of the inhabitants. It also had the added effect of giving her a bit of a mutation. She's packing something under those pants, and she's not afraid to use it..

Despite the mental overwrite, she still knows how to use her weapons, though; she'll create a blockade in tight corridors with her riot shield to prevent Alicia from passing by until she's defeated. If you try to get too close to her, she'll hit you hard with a shield bash, knocking Alicia over in just one hit. If you leave her alone long enough, though, she'll pull her shield back and try to hit you with her SMG - it's not a very powerful weapon, though, and it presents the best opportunity to attack her early on. Later powerups could prove to make the shield a bit easier to bypass, as well.

The Warped Sentry will be available as of v.19, the update that's being worked on right now. With any luck, she'll have all of her H-scenes available right from the start - I'm certainly aiming for it! If all goes according to plan, this update will have a whopping 5 new H-animations compared to v.18, which is by far the biggest increase in the history of CPE's development.

Well, that's all from me for now. I'll share one of her H-scenes before the update comes out, as well as a look at the game's new menus - and I should have some other good news to share soon as well!
-A42
Posted by Anon42 at 4:43 PM No comments:

Hey everyone! Quick update for you all - yesterday was supposed to be the last day of our marathon stream, but we decided to extend it one more day! Me and Orexius are going to be streaming in about 30 minutes, at 1pm EST, up until about 5pm EST. Here's the link if you don't have it: https://picarto.tv/Anon42

I've also discovered over the past few days that doing slightly shorter streams (~4 hours instead of 6+) more frequently is much more productive for myself - so Crisis Point will be going through some stream scheduling changes very soon! I'm planning on trying to stream at least 4 times a week from now on, for about 4 hours at a time. The main reason behind this change is that my computer chair is insanely uncomfortable, and spending more time than that sitting there ends up killing my legs by the end of the day. Splitting up the time a bit more makes me feel more productive, and much more excited to work - which means the work comes out better and everybody benefits in general.

Anyway, that's enough about that! I'm gonna get ready for the stream, and afterwards, I'll make a real update post for you all to show what we've been working on over the past few days! Hope to see you at the stream!
-A42
Posted by Anon42 at 9:34 AM No comments:

Hey guys. First off, I'd like to apologize for not updating here in ages - things have been really crazy around my place lately, between work and life in general. That's not a great excuse, but it is what it is. I had no intentions of abandoning my followers here, life just got really busy. Instead of going on about not posting here, however, let's fix that - starting with a list of all the things that have gotten done recently.

UPDATE .17 AND .18 CHANGES
-3rd boss fight finished
-Caves areas have all been reworked with new parallax background
-New collectible added! Split health upgrades - collect 3 to form a full health upgrade. 6 total so far.
-New area introduced (The Catacombs)
-Work started on two new Patron-paid enemies (Hellhound, and another secret one)
-4th boss fight has been planned out, work to begin soon
-Main menu finally added to the game, including a real menu for control customization
-A bunch of new rooms to explore
-Many bugs and minor issues resolved

Those are most of the major things that have been done over the past two updates. I'll list the other, more minor changes at the bottom of this post - but for now, let's get to what I'm doing for the next update.

This is a list of the things I hope to have done for New Years. I'd like to start speeding up development in the near future if I can, but that'll largely depend on life stuff. I should be moving to a new state and a new home soon, so things should improve dramatically after that once things have stabilized a bit. I should also have an easier time keeping up with updating you guys!

Anyhoo, there have been a few screenshots since the last time I updated here, so here's the links to those (you'll have to click them; built-in image support on Blogger is horrible).

I'd like to start offering more screenshots and videos of new features and enemies in the near future, so keep an eye out for those! Again, I'm really sorry I stopped updating here for so long. I'll do my best to change that in the coming weeks. Thank you all for your patience.
-A42


SIDE NOTE: Almost forgot to mention this! Myself and Orexius will be streaming for the next 4 days - Wednesday, Thursday, Friday, and Saturday - starting at 1pm EST and going until at least 7pm est, possibly later. Hope you guys can stop by! I'll leave the link here, just in case you don't have it yet: https://picarto.tv/Anon42